This guide is for absolute beginners. It is intended to familiarize you with Variables in Lua. If you haven't already, please see Your first script as a beginner tutorial.

What are we trying to do?

At the end of this guide, you will be able to:

You will need to open GoodBlox Studio. Once you have done that, you will need to click "My GoodBlox", select your map, and click "Edit". At this point, you should see your familiar map.

You will need some essentials in GoodBlox Studio to make this work: 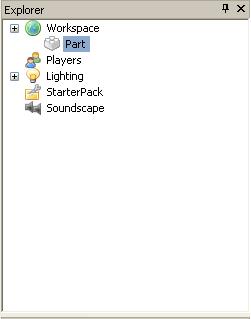 A variable is a word or letter to which you can assign a value. For instance, in algebra, you can give "x" the value of 10. In lua, there's a little more liberty -- not only can a variable be a number, but it can also be a word, like your name:

Notice that the word "johndoe" is in quotes, but the number 1 is not in quotes. That's because "johndoe" is considered a String. In short, you can perform arithmetic on numbers, but not on "johndoe".

Arithmetic can be performed on variables, just as on numbers. For example, if x is equal to 2 and y is equal to 3, then x+y=5. Let's try that in the scripting section:

Open GoodBlox Studio and make sure that there aren't any other scripts in the Explorer window. We're going to start off with a fresh script.

Variables are essential to use in a good script. A variable is a value you can store, then retrieve and/or change later. Defining a variable is very easy, as well. To define a variable, just type "variableName = initial value":

To change a variable, you just do do the same thing, only after the variable is defined:

A local variable is a variable only known ONLY to the script that defines it. To define one you have to "local" before it:

A normal variable is a variable that changes the value it holds. You do not need to put in local. For example, let's say "trans" is the Transparency of a brick. The transparency = 0.5