What is an ad

GoodBlox allows users to create ads to advertise their places, clothing, models, decals, etc. Ads are images that users upload. When the image is clicked, it goes to the thing that you are advertising.

Advertising is a good way to bring attention to the awesome thing you have just built. You may even be able to make money by buying ads for an item which other players may then purchase or visit.

Internet advertising is everywhere. If you get good at creating ad campaigns on GoodBlox, you are qualified for a lot of internet-related marketing jobs!

How Advertising on GoodBlox Works 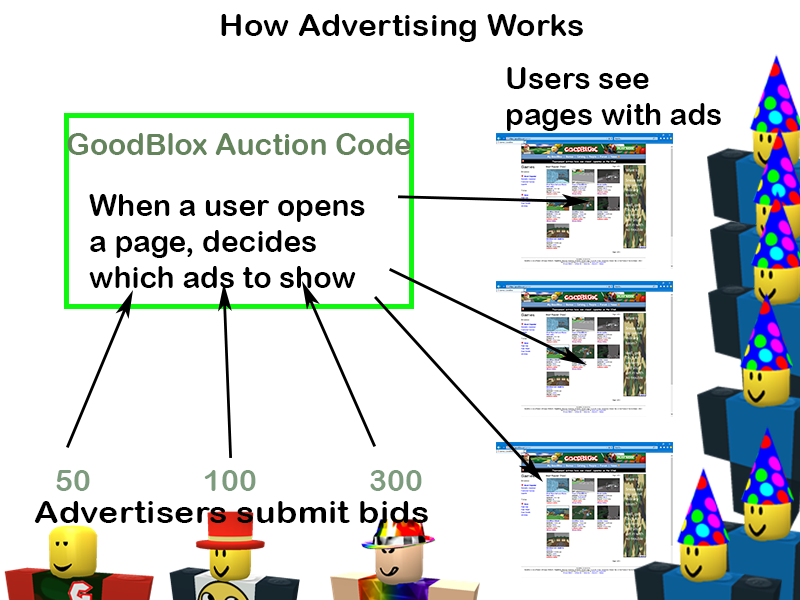 1. Users like you create a good-looking ad for a specific place or item.

2. Those advertisers bid an amount of tickets.

3. When another user loads a page on goodblox.xyz, the GoodBlox Auction code decides which ad(s) to show them

How the Auction System Works

Advertisers don't buy ad space on GoodBlox. They bid for it in an auction. There is a limited amount of ad space to go around (we only show so many ads per day), so an auction is run and the players who are willing to pay more, get more impressions.

In general, if you spend twice as much, you will get about twice as many impressions.

A user loads up the games page and we need to figure out which ad to show them. We can only pick one. Do we go with A, B, or C?

We actually pick one of A, B, or C at random. But we don't give each ad equal odds. The probability that a specific ad is shown is equal to that ad's bid, divided by the total bid for all ads in the system. 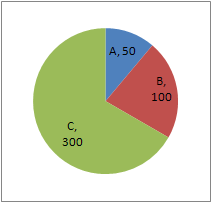 Things to Know About the Auction System

Impression - Every time a user sees your ad, that is 1 "impression".

Clicks - Every time a user clicks on your ad, that is 1 "click".

CTR - CTR is short for Click Through Rate. Simply, it is the percentage of people who see your ad that also clicks on that ad (clicks / impressions). If everyone who sees your ad clicks on it, you have a CTR of 100%. Good ads have a high CTR. A high CTR means you are buying clicks for cheap. A low CTR means you have to show your ad to a ton of people to get many clicks at all; and this is expensive.

Run - When you bid to display an ad, you are launching the ad on a "run". Currently all runs last for 24 hours.

Campaign - A ad campaign is a series of ads that are all advertising the same thing. The GoodBlox ad system doesn't support campaigns specifically.

CPC - "Cost Per Click". The GoodBlox ad system does not currently show you your CPC, but it is a very useful concept. Put plainly, it is the number of tickets you have to bid to get a single click. CPC = CTR * Bid. Good ads will have a low CPC. Bad ads will have a large CPC.

To create an ad, go to one of your place's pages' and press the link "Advertise this place" underneath your avatar.

This will bring you to a page where you can get the ad templates, and upload ads.

Once you have created and uploaded an ad, you can now display it. Go to you profile and press "Ad Inventory". This brings you to a page where you can run your ads on the site. To start running an ad, press "Run ad" on the right side of the pane. You have to bid money to get your ad put up over other people's ads.

Impressions: How many times your ad has been shown on a page so far.

Clicks: How many time people have clicked your ad.

CTR: What percentage of showings resulted in people clicking on the ad.

Bid: How much you bid